Larry’s Not That Strong a Hiker

Notes toward the writing:

One line is all it takes sometimes to pull the starter and spark the motor of the mind. 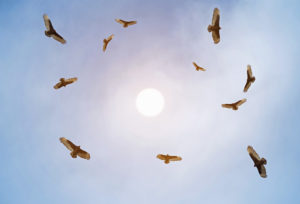 I’m hoofing it homeward on the morning trail when two retirees decked out in spandex cycle past, and one biker hollers to the other: Larry’s not that strong a hiker, if you didn’t know.

His words punch out into the air as they whoosh past, the phrasing’s cadence powered by his pedal-push. The sentence hooks my ear so that my own feet fall in line: LARry’s NOT that STRONG a HIker, IF you DIDn’t KNOW. In seconds, the bicycles disappear around the corner, but the man’s words keep step with me. Thrum on drum-like, rim shots, troop chant, boot stomp— LARry’s NOT that STRONG a HIker—and my mind, too, strides to the beat, and finds poor Larry sweating up the trail, last in the pack, stopping for yet another swig of water from his bottle. Hey guys, he says, hang on a sec, just need to tie my shoe, and Wow! You see that turkey vulture circling overhead?

Farther along the path, his buddies raise an eyebrow, and make that tucked-in-the-corner-of-the-mouth and sucked-in tchk sound that signals how much lower down the slope poor Larry is. He’s the one in every group, the schleppy fall-behind, the one who cannot, cannot, cannot seem to catch his breath. Larry, coming up short. Larry, short for Lawrence, meaning “crowned in laurels”, but he’ll hardly win a prize for speed or stamina. Larry’s not that strong a hiker, if you didn’t know.

Before he was the boy in the schoolyard whose belly pudge squidged out beneath the hem of his too-short striped t-shirt, he was someone’s newborn son. I picture all the Larrys that I know—line them up in a mind’s-eye row. None of them are babies. All have beards or moustaches. All are grey and white with age, are bald, are uncles, are men with pleated pants, men eating fried chicken at a Sunday picnic and giving everyone a thumbs-up.

No doubt, the spandexed men on bicycles carry on their talk, and down the trail have turned to what’s next on the topic docket—politics, the latest throne speech, the floods and hurricanes and earthquake toll. But Larry sticks with me, idling as I power-walk my final mile. I feel his sweating shadow at my back, the archetype of every dawdler, and emblem of each time I’ve shot a glance, rolled my eyes, shaken my head and clucked my tongue over the one who can’t catch up. Larry, scapegoat for the rush and race, haunting me home. Larry, slowpoke mystic, chanting to my own slow heart that lags. Larry, bidding me wait up, breathe in, the world is flying by at soundbite speed, the earth is tilting on its axis, the climb is growing steeper, so tip your head back and wow at how that looping wingspan circles the old sun, awe at how it’s making us the bullseye of its grace.