Notes Toward the Writing 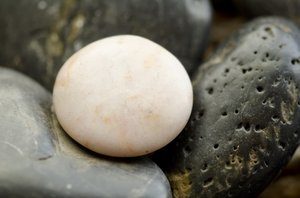 “Namesake” began with thoughts about my own name, in the context of thinking about pregnant friends searching for names for their unborn children. So much weighing of meanings, sounds, family namesakes, considerations about how a child’s name might determine their social standing in the world. In its earliest chicken-scratch first-drafting form, this piece contained the following fragments, jotted, scattered, and trying to find their fit and focus:

Carla, a feminine version of Carl or Charles, from the Old English “ceorl,” meaning fellow, man, peasant. Carla, meaning “strong and womanly,” and, according to Urban Dictionary, is a “truly beautiful girl” who has “long, wavy, and gorgeous black hair that you would just love to run your fingers through” and/or “beautiful brown hair that she always styles amazingly.”

When I was a kid, my hair shone white-blonde and made me look like an anemic albino, and my name felt to me like a stiff pair of clogs, too tight at the toe, boxy, sensible, and never quite letting me run full tilt. Spoken aloud, my name sounded at first harsh, then like a pirate’s cry, then sing-song—a name whose sound couldn’t make up its mind, couldn’t decide on a jukebox song.

I was the only Carla in any class. Amidst the Jennifers and Tracys and Michelles, I stood out, but not beneath a spotlight’s glow; rather, I stood out on the sidelines along with the other solo names, the Cinderita, the Ramona, the Suki. Give me a nickname, I told my friends, when I read somewhere that a nickname was a sign of affection.

And then, in the writing, I landed on this line: “He wanted to name me Edna.” A true line. And down this road, the writing turned.

My father wanted to name me Edna, after some hot chick he knew in his fast car days. I picture him at the wheel of his Ford Fairlane and her riding shotgun, shrieking around each hairpin curve, a gauzy scarf tied over her hairsprayed beehive to guard against the wind. With every rev of the pedal to the floorboards, my father eyes Edna, takes in her starlet beauty, and tucks away her name like a token for the daughter who becomes me.

Edna. Two syllables whose sound performs a nasal thud. A name whose music conjures a thick-waisted peasant in sagging pantyhose shuffling down the canned goods aisle. Edna, as if derived from the Welsh for stout-bellied plough horse, or peat bog rot, or hand-carved wooden tooth. In truth, Edna comes from the Hebrew word meaning “pleasure,” and is the name of the apocryphal wives of Enoch and Methuselah, two men who limped out their days knowing well how troublesome a name can sound.

My life with that name, Edna, deviates from the known and holds a different story. At the annual spring music festival, I do not take the seat at the glossy black baby grand and play a Bach invention bright as a mathematical machine. I do not glissando through the sweetness of a Mendelssohn sonata. Instead I trudge out the “Peasant’s Dance” that deepens to a dirge, the chords warped minor, and then turn to Rachmaninoff with all his Russian darkness. The music of an Edna demands a dress ill-fitting and black, black shoes with heavy rubber soles that squeak along the stage. Whatever Hollywood pin-up glamour my father saw in Original Edna has been scrubbed clean of connotation. I, as the daughter named Edna, refuse lipstick and need no kohl-rimmed eyes. My glare is glower enough. When my mother calls me to come set the table for supper, come ladle the borscht into bowls, her voice is only a recurring dream from when she was alive, before the tumour swelled her stomach taut and pushed her to the dirt. A winter burial. The hearse stuck in snow. No flowers but carnations and the brittle stems of baby’s breath.

When I write my name in cursive, practicing my signature for future love, the E looks like a stiff doily curling at the edges. But in printed script, the E straightens to a hardback chair, the kind to silence a sullen child. I dream of being other girls whose names ring out like a Sunday school picnic—Heather, Summer, Jessica, Denise!—more sunshine than storm cloud, more sparrow than slug. I dream of the white stone that holds my hidden name, one written for me in the stars, inscribed in ancient God-knows-what letters, a stone He’ll press into my palm one bright hour and then, then, I’ll know, too, all the secrets of my name.

You could have been something else, my father tells me. A Shannalyn, all sock hop flounce and hair-bow ponytail. Or Corrine, an earful of water. Or Carla, he says, you could have been a Carla. That’s what your mother wanted. Carla. The clunk of that name. A hard music. Like the twirl of a tire-iron in the hand of some kid wearing a chain of clover for a crown, some girl marching over gravel as if born of royal blood, and singing at the top of her lungs.